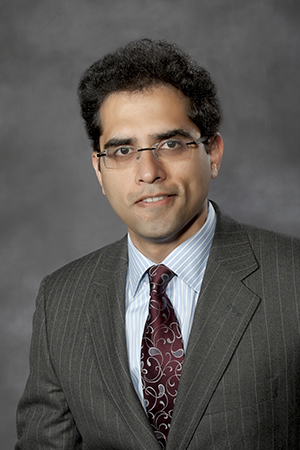 Dr.Koneru's association with VCU Pauley Heart Center started in 2010 when he started his advanced training as a fellow in Cardiac Electrophysiology and in 2012 he joined the VCU Pauley Heart Center as an Assistant Professor, specializing in Cardiac Electrophysiology. Dr. Koneru earned his medical degree from the Osmania Medical College, an institution with thirteen teaching hospitals and one of the oldest medical colleges in India. Dr. Koneru completed his residency and chief residency in Internal Medicine at St. Luke's-Roosevelt Hospital, Columbia University College of Physicians and Surgeons, New York. He was recognized by his peers as "outstanding physician of the year" in every year of his residency.

Dr. Koneru's clinical expertise includes the entire gamut of clinical electrophysiology. He performs complex ablations that include epi and endocardial mapping and ablation for supraventricular and ventricular tachycardias. He also performs cryo-balloon and radiofrequency ablation for atrial fibrillation. Dr.Koneru's skills extend to complex lead management issues and he has performed numerous lead extractions with laser assisted technologies and femoral snares.

Dr.Koneru's research interests include mapping and ablation of complex arrhythmias, post-operative atrial tachycardias, atrial fibrillation, ventricular tachycardias in LVAD patients and shock reduction in patients with ICDs. He is actively involved in clinical trials of investigational mapping technologies for atrial fibrillation and atrial tachycardias. Dr.Koneru's research has appeared in highly respected journals such as the Journal of the American College of Cardiology, Circulation: Arrhythmia and electrophysiology, Heart Rhythm and PACE. He is an invited reviewer for Circulation Arrhythmia and Electrophysiology and is a faculty member at the annual scientific sessions of the Heart Rhythm Society.