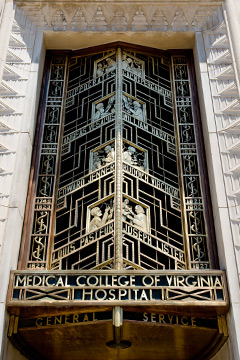 The VCU School of Medicine’s largest clinical department, the Department of Internal Medicine, was first organized in 1926 with the appointment of William Branch Porter, M.D., as chair. He assumed his role the following year and served for 29 years before retiring in 1956.

Porter was succeeded by W. Taliaferro Thompson Jr., M.D. Under Thompson’s leadership, 12 divisions were cultivated in 1966. Ten divisions still form the core part of the academic programs and services offered in the department. Also in 1966, the Hunter Holmes McGuire Veterans Affairs Medical Center was affiliated as a teaching hospital — primarily through shared internal medicine programs and faculty. Thompson retired in 1973 after serving 14 years.

In 1974, Harold J. Fallon, M.D., was appointed the third department chair and significant divisional program changes were undertaken involving eight of the twelve original divisions. In addition, four new divisions were implemented and a tremendous effort was initiated in the area of sponsored research, with significant gains made in NIH-funded areas.

John E. Nestler, M.D. assumed the leadership role in November 2009. Under Nestler’s leadership the Division of Geriatric Medicine was created and the Division of Quality Health Care was folded into the Division of General Internal Medicine. The position of associate chair for faculty development was created, which introduced faculty mentorship and intra-departmental grants programs, and a department-wide quality improvement program was initiated with physician leaders in each division and the appointment of a departmental director of performance improvement. 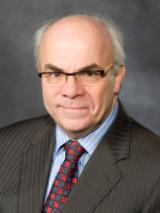 John E. Nestler, MD, was appointed the William Branch Porter Chair of the Department of Internal Medicine on Nov. 1, 2009, having served as vice chair of the department since 2003 and chair of the Division of Endocrinology and Metabolism since 1997. He holds joint appointments as professor in both the departments of Obstetrics and Gynecology and Pharmacology and Toxicology, and is also Program Director of VCU’s U54 SCCPRIR Center on Clinical and Translational Research in Polycystic Ovary Syndrome.

Dr. Nestler is a recognized professor, of both undergraduate and graduate medical education, and a distinguished scholar with an international reputation for his research on polycystic ovary syndrome and insulin resistance. His work was seminal in establishing insulin-sensitizing drugs as a treatment for infertility in women with the polycystic ovary syndrome, and has addressed the impact of insulin resistance on long-term health in the disorder.

As principal investigator, Dr. Nestler is responsible for two active National Institutes of Health-funded grants studying the role of insulin resistance in polycystic ovary syndrome. He has been a principal investigator on numerous research projects, receiving funding from grant sources that include the National Institutes of Health, the Juvenile Diabetes Association, and the American Diabetes Association.

Dr. Nestler’s honors include two of the highest honors of the VCU School of Medicine, namely the “Outstanding Research Achievement Award” and the “Distinguished Mentor in the Clinical Sciences Award.” He is a member of a number of professional associations, including the Association of American Physicians, American Society of Clinical Investigation, and the American Clinical and Climatological Association. Dr. Nestler is a co-founder and past president of the Androgen Excess and PCOS Society, and a past president of the Virginia affiliate of the American Diabetes Association. Additionally, Dr. Nestler holds three U.S. patents; has co-edited three books; and has contributed more than 180 articles to US and European publications, such as the New England Journal of Medicine, Diabetes, Diabetes Care, Circulation, and The Journal of Clinical Endocrinology and Metabolism.