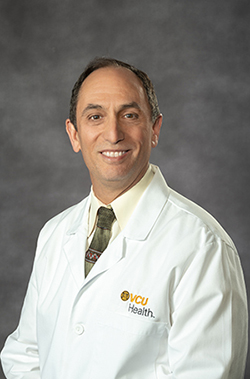 Dr. Sterling received his BS in Chemistry and Natural Science from Muhlenberg College in Allentown Pa in 1982, a MA in Biochemistry from the University of Texas in Austin in 1984, and a MD from Jefferson Medical College in Philadelphia in 1988.  After completing an internship and residency in Internal Medicine at Virginia Commonwealth University/Medical College of Virginia in, he went on to complete a fellowship in Gastroenterology, Hepatology, and Nutrition at VCU which include specialized training in Transplant Hepatology in 1994.  He served on the faculty of University Hospitals of Cleveland/Case Western Reserve University where he was associate Medical Director of Liver Transplantation 1994-1997.  He returned to VCU in 1997 and is currently a VCU Hepatology Professor of Medicine (promoted to tenure June 2011) in the Divisions of Gastroenterology, Hepatology, and Nutrition and Infectious Diseases. Dr. Sterling is Board Certified in Internal Medicine, Gastroenterology, and Liver Transplantation and has a Master’s degree in Biostatistics and Clinical Research from VCU.  He is currently Section Chief of Hepatology and Medical Director of Viral Hepatitis at VCUHS, the Transplant Hepatology Fellowship Director, the interim Medical Director of Liver Transplant, and Associate Program Director for Scholarship and Research for the core Internal Medicine Residency.  His research interest is in HIV-liver disease which is supported by several NIH grants.  He is site Principle Investigator (PI) for the Hepatitis B Research Network and was PI for the HALT-C trial, both sponsored by the NIH.  He currently has an R01 investigating HBV in those coinfected with HIV and is site PI on the R01 Fatty Liver in Persons Living with HIV.  Additional past NIH support has included a K23 and an R03 in HIV-Liver disease.  Other research interests include biomarkers for hepatocellular carcinoma, viral hepatitis, and liver transplantation.  He has published over 220 manuscripts, several book chapters and serves on several prominent committees of national associations such as the AGA, AASLD, and ACG and has served on several study sections of the NIH.  He is on several AASLD committees including the AASLD Transplant Hepatology Pilot Steering Committee, the Development Committee, the Education Committee, is Chair of the Liver-Biliary Council of the AGA, a member of the Gastroenterology Board of the American Board of Internal Medicine, and has served as the ACG Governor for Virginia for 6 years.  During his time at VCU, he has served on several important VCU committees including the IRB, VCU Faculty Senate, and the IRB Leadership Executive Committee.  He is currently on the University Conflict of Interest Committee, the Blood Borne Pathogen committee, and the CCTR Grant Review committee. He is also the Assistant Chair of Research for the Department of Medicine and a member of the Clinical and Translational Science Award (CTSA) executive committee.  He has won numerous awards for teaching and leadership and was voted “Top Doc” in 2012 and 2013 Richmond magazine.