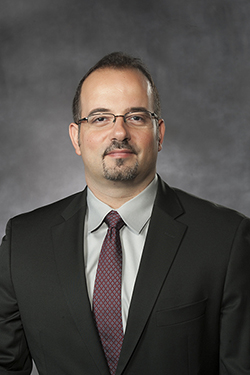 A native of Beirut, Lebanon, Dr. Salloum earned his BS in Biology from the American University of Beirut in 1996. He then immigrated to the United States in 1998 to pursue his Doctorate in Physiology from Virginia Commonwealth University School of Medicine followed by postdoctoral training in Molecular Cardiology in 2008. He was appointed as Assistant Professor of Medicine (Cardiology) in 2009, promoted to Associate Professor of Medicine in 2015, awarded Tenure and appointed as Assistant Chair for Research for the Department of Internal Medicine in 2018, and promoted to Professor of Medicine in 2020. Dr. Salloum also holds an affiliate appointment in the Department of Physiology & Biophysics at VCU School of Medicine.  He was named the inaugural Natalie N. and John R. Congdon Sr. Endowed Chair, VCU Pauley Heart Center in 2018.

As a talented and inspiring educator, he has participated in several courses offered to physiology graduate students, dental students, as well as physiology labs to first year medical students. In 2014, he assumed the position of course director of PHIS 512: “Cardiac Function in Health and Disease”, which is offered by the Department of Physiology & Biophysics to graduate students. This course is distinguished by its clinical focus on a variety of cardiac diseases. He has also mentored numerous undergraduate and graduate students (Masters/PhD and MD-PhD) as well as cardiology fellow trainees and postdoctoral fellows. Dr. Salloum was honored with the Outstanding Teacher Award from the Department of Physiology and Biophysics in 2016.

Dr. Salloum’s current research is focused on cardiac injury, inflammation and failure. His major interest is developing novel pharmacologic strategies to combat adverse cardiac remodeling that leads to heart failure. His research is directed towards studying the role of novel small molecules, which include hydrogen sulfide (H2S) donors, relaxin receptor agonists as well as microRNAs (miRs) in cardiac health and disease. As a principal investigator, Dr. Salloum is currently funded by grants from the National Institutes of Health. Dr. Salloum was previously funded by grants from the American Heart Association (2010 – 2016) and Industry (Novartis Pharmaceuticals, Inc. from 2013 – 2018).

Dr. Salloum serves as Co-Chair for one of the American Heart Association’s Cardiac Biology Regulation Study Groups and ad hoc Reviewer for Strategically Focused Research Network on Heart Failure, the National Institutes of Health, the National Science Foundation and international funding organizations for cardiovascular research. Due to all his service contributions to his department and the scientific community, Dr. Salloum was awarded the Excellence in Professional Service Award in 2018 from the Department of Internal Medicine.

He has authored or co-authored more than 100 articles that have been published in high quality peer-reviewed biomedical journals such as Circulation, Circulation Research, Journal of the American College of Cardiology, Proceedings of the National Academy of Science, Cardiovascular Research, European Journal of Heart Failure, and authored or co-authored 3 book chapters.

For a Complete List of Published Work and Citations: